PLD is a physical vapor deposition technique in which the pulsed beam of a high power ultraviolet laser is focused inside a vacuum chamber on a target. The target is usually a sintered ceramic with the chemical composition of the film that is to be deposited. A significant removal of material occurs above a certain threshold energy density (depending on the material, and laser wavelength and pulse duration). The ejected material forms a luminous ablation plume directed towards a substrate placed front the target at a distance of 4-8 cm, where it re-condenses to form a film. Usually the plume (composed by neutrals, ions and electrons, and more complex species) conserves the stoichiometry of the target. The deposition can occur either in ultra high vacuum as well as in a background gas (up to several mbar) such as oxygen, which is commonly used when depositing oxides.

A main characteristic of PLD is that the ablated material only arrives at the substrate during a few microseconds after each the nanosecond laser pulse, being the laser frequency usually between 1 and 10 Hz. It is also relevant that atoms and ions in the plume have a high energy that can be controlled by the pressure during deposition and other parameters. PLD permits in-situ characterization tools, being reflection high-energy electron diffraction widely used. A limitation of PLD is the small deposition area, generally less than 1 cm2 in standard set-ups (although systems for large area are commercially available). Another limitation is that the plume is highly directional, and thus not suitable for conformal deposition of non-flat substrates.

PLD has been used to deposit films of a variety of materials. It is extensively used for the production of functional as copper oxide superconductors, ferroelectric and ferromagnetic oxides, etc. Its use is not limited to grow complex oxides, and it is used for other materials including diamond-like carbon, refractory materials, and even metals and polymers. In addition, a novel deposition technique, known as matrix-assisted pulsed laser evaporation (MAPLE), has been developed to deposit polymers and biomolecules. In MAPLE, a frozen matrix consisting of a dilute solution of an organic compound in a relatively volatile solvent is used as the laser target to minimize photochemical damage that would result from the interaction of the laser light with organic targets. 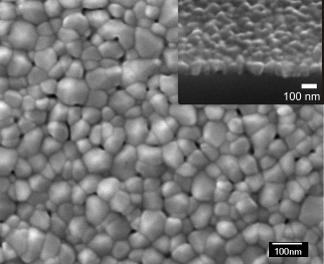