Scientific highlights
FROM OUR JOINT RESEARCH
B. Marmiroli, B. Sartori & H. Amenitsch

Microfluidic systems for handling/sensing chemical and biological samples could improve their performance through the employment of materials with selected functionalities in specific regions of the device. Among these, mesoporous materials feature ordered tailored structures with uniform pore sizes, highly accessible surface areas and large pore volumes, making them an attractive support for functionalization and catalysis. The ordered mesopores are an ideal host for functional organic molecules or nanoparticles, and patterning them would allow the design of devices for different types of advanced applications, like DNA nanoarrays.

Films were prepared according to well established protocols and exposed to thermal treatment and different X-ray doses at the DXRL beamline at Elettra-Sincrotrone Trieste, resulting in different pore size and arrangement.

Then, the structural study of the hydration of model lipid membranes fed with water through the porosity of mesoporous substrates was conducted. A proper lipid membrane (multilayer POPC model membrane), that has a structure which is sensitive to the presence of water, was selected.

Time resolved GISAXS measurements were taken on the lipid membrane deposited on the mesoporous films in controlled environment, using a custom made humidity chamber mounted at the Austrian SAXS beamline at Elettra-Sincrotrone Trieste. The first results evidenced partial hydration of the lipid membrane through the mesopores, demonstrating the possibility to use the porosity of the film to convey liquids. Moreover, hydration can be tuned through both the recipe and the irradiation dose of the mesoporous film.

“Ordered mesoporous thin films can be effectively used to quickly align the GISAXS stages both for synchrotron and for conventional lab sources” says Amenitsch.

“The possibility to convey liquid through the pores would enable the use of such films for more complex biological studies by selectively functionalizing the mesopores, opening the way for a new kind of lab-on chips “ says Marmiroli. 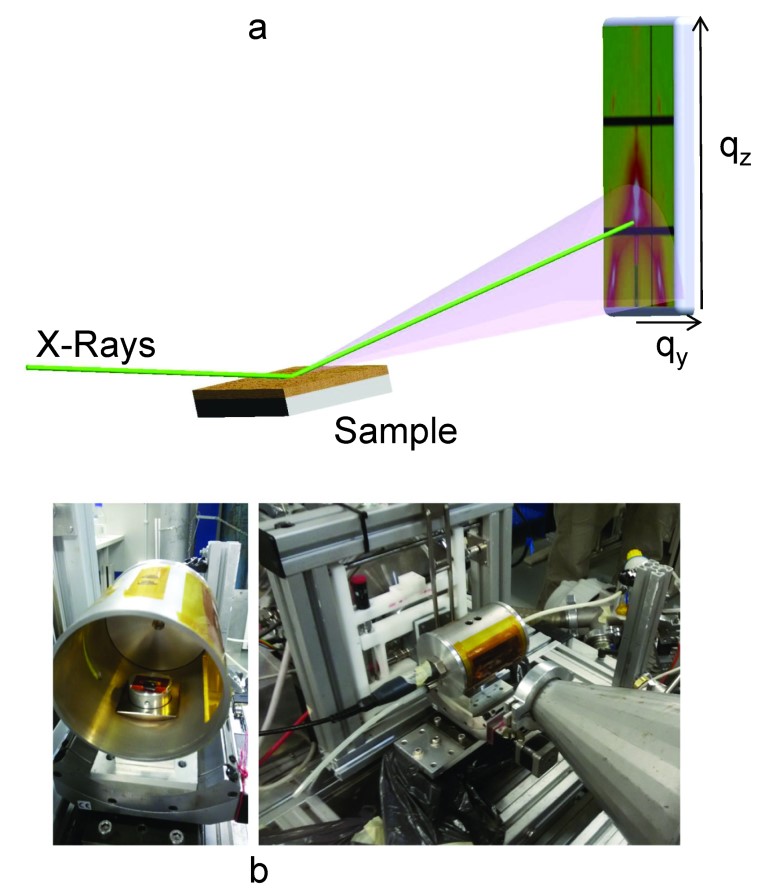 (a) Scheme of the GISAXS experiments. (b) Humidity sample chamber mounted at the Austrian SAXS beamline at Elettra-Sincrotrone Trieste.

NOTE: The mesoporous films are currently been used by the X-ray Optics Lab of Elettra-Sincrotrone Trieste for the laboratory GISAXS setup alignment, and are as well available on request for the users accessing the TUG facility.