How NFFA-Europe helps to support Innovation for Grand Challenges

Innovation can be defined as the ensemble of actions and processes capable to transform an idea/device into a product/service that offers a tangible return on the investment.

The Europe 2020 strategy focuses on the ability of the European Union (EU) to create millions of new jobs to replace the ones lost during the recent economic crisis, and the consideration that future living standard will depend on the ability of the economic environment to stimulate innovation in products, services and business models. In this respect innovation is at the basis of this strategy and nanotechnology is destined to have a crucial role in the process. Nanotechnology is expected to significantly improve modern materials and production technologies, which are necessary for the competitiveness of industry and is considered a potential machine for economic growth in the 21st century. These great expectations are clearly reflected in the expenditure on research and development and number of scientific publications, constantly growing in the last two centuries.

Since the beginning of its activities, NFFA-Europe proactively contributes to the innovation in nanotechnology in two major ways:

Industry as a user

NFFA-Europe was born with the mission to establish a platform to carry out comprehensive projects for multidisciplinary research at the nanoscale, enhancing and facilitating industry access to nanosciences and nanotechnologies, through a one-stop-shop. The project targeted a minimum of 5% industrial participation.

Since the first calls, industry response was in line or better with target (see plot below), leading to 23 accepted proposals involving industry, out of 217 since the beginning of the project in 2016. 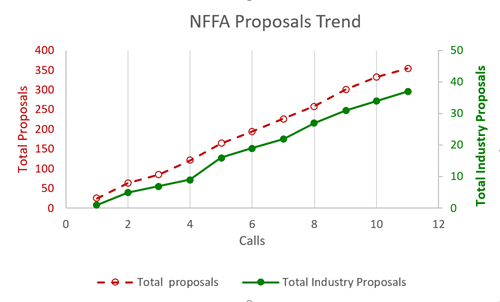 In the “knowledge economy” perspective, further increased industry involvement is needed. Future actions to improve the impact of this action might address:

The Joint Research activities have developed and matured prototypes, expanding the platform of advanced techniques and methodologies made at disposal of users at the various NFFA access sites. In some cases the technological efforts made in a tight collaboration among JRAs hold promise for application and new outcomes. the Fast-scan STM/AFM developed by CNR and TUM in JRA1, after successful test and high level scientific results, is ‘under observation’ for licensing and exploitation as a market product, as a patent related to the polarisation dependent non-linear microscopy of 2D crystals raised from activity at FORTH within JRA4. New techniques with potential applications have been put in place and optimised , in particular when nano lithographic process are used; this is the case of the 3D lithography approached by PSI, FORTH and DESY in JRA2, where a 60% buckyball size reduction has been observed, as well as the closeness to a 10 nm size for diffractive X-ray optics (PSI in JRA1) opening a vast new field of application in nanoanalytics and synchrotron radiation and X-Fel technology and research. Last but not least, in the context of the activities of JRA5, the ESRF and the CEA-LETI signed a collaboration agreement with the Company Zeiss to carry on the joint development of a platform of correlation microscopy that allows interoperability between the laboratory instruments and the Analytical Large Scale Infrastructures. The collaboration is focused on the technical design of a set of tools and on the following commercialisation of the product by the Company.