In a report published in Science, scanning tunneling microscopy at video-rate and ab-initio calculations demonstrate that nickel atoms act as single catalysts for graphene growth.
Fast STM frames at the edge of a growing graphene flake. Credits: L.L. Patera et al., Science 359, 1243–1246 (2018) Not for redistribution.

Graphene is a two-dimensional material composed of a single layer of carbon atoms, flexible like plastic and with a mechanical resistance a hundred times higher than steel. This is why it is considered practically perfect for multiple applications in industrial and technological fields; however, it is difficult to produce, making its use extremely expensive.

A study conducted in Trieste (Italy) by the Istituto Officina dei Materiali of the Italian National Research Council (IOM-CNR) and by the Department of Physics of the University of Trieste, in collaboration with the National University of Cordoba (Argentina), published in the prestigious Science magazine, identifies the mechanism of graphene growth on the surface of a common metal, nickel, opening up new possibilities in production technologies.

on a nickel surface, the mobile metal atoms act as catalysts, facilitating the formation of graphene

"We know that individual atoms are always present on metal surfaces, where they can freely diffuse and participate in many of the processes that take place there", explains Cristina Africh, of IOM-CNR. "In our study we have shown that, on a nickel surface, the mobile metal atoms act as catalysts, facilitating the formation of graphene".

The scientific team was able to record this process in real time, revealing the behavior of individual surface atoms, by means of a high-speed scanning module developed in the recent years in collaboration with Elettra-Sincrotrone Trieste and recently improved thanks to NFFA-Europe funding.

"With a scanning tunneling microscope”, continues Laerte Patera, who worked on this project at IOM-CNR for his PhD thesis in nanotechnology at the University of Trieste, "we filmed what happens at the edge of the graphene sheet during its growth, at a temperature of about 450 degrees Celsius, collecting up to 60 images per second, a frame rate much higher than those used in cinematography or in television and perceived by the human eye".

"From the videos it is clear that the growth process takes place line by line, like a knitting machine weaving a thread to form a piece of cloth: at the microscopic level, the individual nickel atoms perform the same function as the machine needle, adding new stitches to the edge of the fabric in an ordered sequence", explains Giovanni Comelli, from the University of Trieste. "Numerical simulations, conducted at our University under the guidance of Maria Peressi and performed in collaboration with the National University of Córdoba (Argentina), mostly based on quantum mechanics, clarify all details of the experimental results and clearly explain the role played by nickel adatoms which, by temporarily attaching themselves at the graphene edges, allow the inclusion of new carbon atoms". 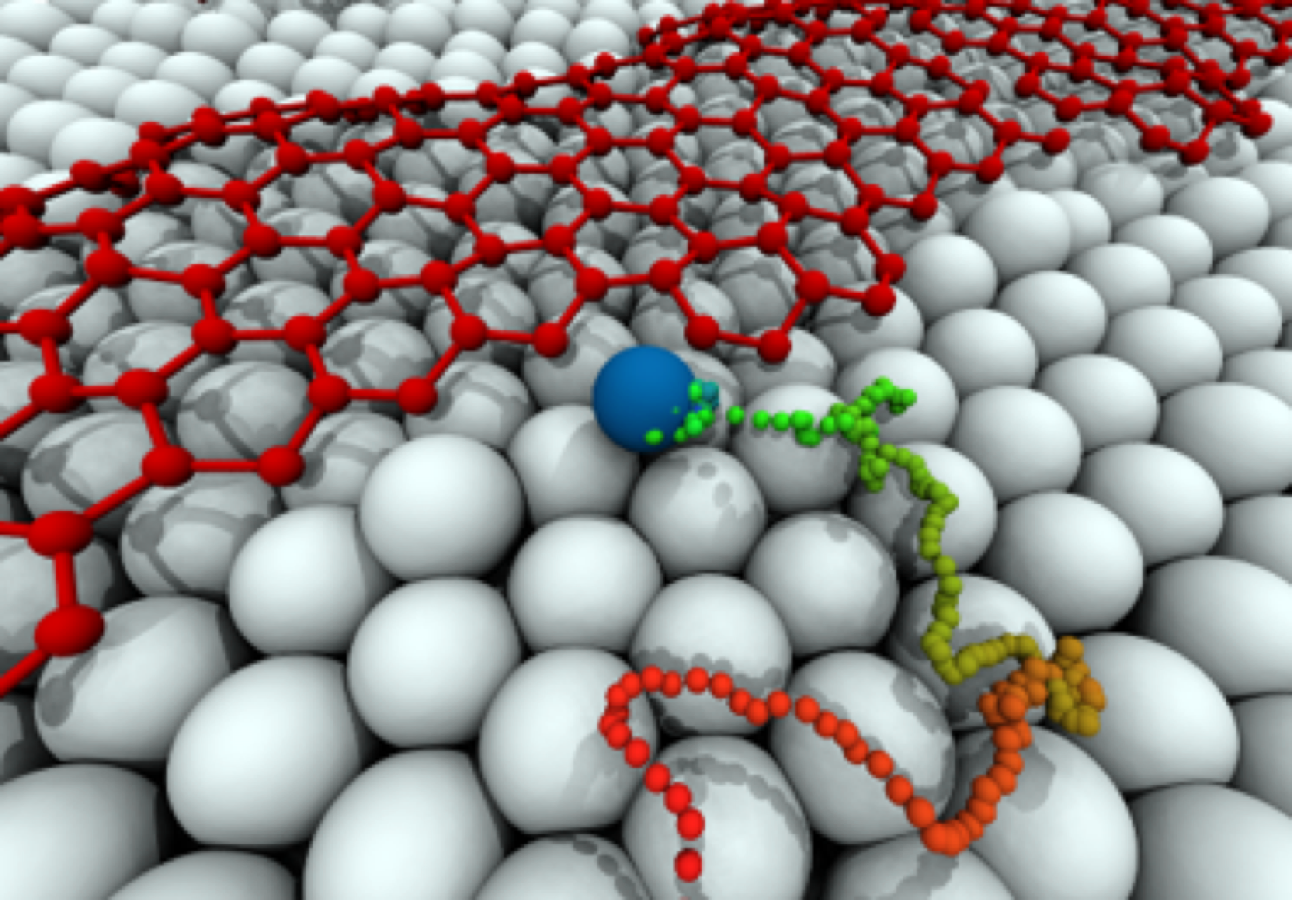 Video-rate STM experiments were performed in the STM laboratory of CNR-IOM thanks to FAST, the Fast-scan module developed by CNR-IOM, TUM and ICN2, as Joint Research Activity in the frame of the NFFA-Europe project. FAST is an add-on module applicable to commercial STMs and AFMs and capable to increase the conventional frame rate by several orders of magnitudes. FAST is presently available to NFFA-Europe users for selected STM experiments as part of the Structural & Morphological Characterisation Installation at CNR.

Potential users are invited to contact the scientists in charge for a technical pre-evaluation before submitting a proposal.