A typical BCP lithography process consists on spinning a BCP solution on a surface, anneal to induce the self-assembly, and once the two phases of the block copolymer are segregated, the nanoscale pattern is spontaneously formed. The characteristic length of the pattern is determined by the size of the BCP molecules. Patterns from 40 nm to sub-10 nm pitch can be easily obtained. Fingerprint-like or hexagonal-dot-like patterns can be fabricated depending on the composition of the BCPs.

While the patterns present a small degree of order, it can be increased by performing a pre-patterning of the surface, which forces the resulting block copolymer pattern to follow a certain orientation and to allocate the BCPs blocks at the desired positions. This is known as directed self-assembly (DSA) of block copolymers. The surface pre-pattern can be of chemical or topographical nature, which are respectively known as chemical epitaxy DSA or grapho-epitaxy DSA.

The resulting BCP DSA patterns can be transferred to the substrate. First, one of the block is selectively removed, and the other block acts as an etching mask. In this way, multiple types of nanostructures can be obtained: nanowires, diffraction gratings and hole arrays, for example. 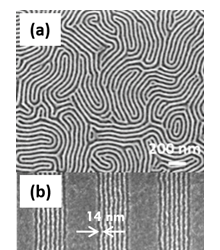