High pressure phase analyzers, lab scale and pilot plants are available for the  development and application of efficient, robust and green technologies,  based on the use of compressed fluids (CFs), such as compressed CO2, for the preparation of molecular materials (organic-organic, organic-inorganic, biomolecules-organic) with high structural homogeneity at supramolecular, nano- and microscopic scale. This processing platform allows the one-step preparation of micro-and crystalline powders with a high polymorphic purity, polymeric micro- and nanoparticulate matrices loaded with active ingredients with homogeneous distribution, encapsulation of biomolecules and small molecules in highly homogeneous colloidal nanoparticles, such as nanovesicles and nanoliposomes, as well as polymeric porous matrices.

The unit has also instruments and the necessary know-how to undertake nanostructuring of molecular biomaterials in films and surfaces, with application in the development of new biomedical devices.

Platform for nanocrystal colloidal growth and assembled superlattices of nanoparticles.

Infrastructure for the development of various kinds of colloidal nanostructures with controlled dimensions, including assembled nanostructures in which different properties coexist. The infrastructure can be used for nanocrystals synthesis under anaerobic conditions.

Synthesis of organic as well as hybrid organic-organic and organic-inorganic nanostructures.

For the synthesis of the organic macro/bio molecules, the polymeric and the core-shell particles as well as the hybrid organic-organic and organic-inorganic nanostructures there is a fully-equipped polymer synthesis laboratory where a variety of controlled/living polymerization techniques can be performed (Atom Transfer Radical Polymerization, Group Transfer Polymerization, Emulsion Polymerization etc). Additionally, for the development of organic-organic or organic-inorganic nanohybrids in the melt there is a micro-extruder and micro-mixer. The synthesized materials can be molecularly characterized with Size Exclusion

Fabrication of biological and biocompatible materials for tissue engineering scaffolds.

Several compact fs and ps micro/nano machining workstations for the fabrication of scaffolds for cell growth and tissue regeneration. A soft lithography facility is offered for the replication of laser machined topographies onto soft polymeric materials.

The infrastructure is offered for the fundamental investigations at the intersection of biology and nanomaterials. It provides the necessary equipment (basic cell culture, sample preparation, assays and imaging equipment) for the study of the effect of nanotopography on specific cell responses, such as cell adhesion, morphology, proliferation, migration differentiation. The facility can be additionally used for the investigation of the cytotoxic, genotoxic and immunotoxic effects of nanomaterials. For all aforementioned studies mammalian cell lines, primary culture cells and stem cells can be used depending on the selected endpoint. 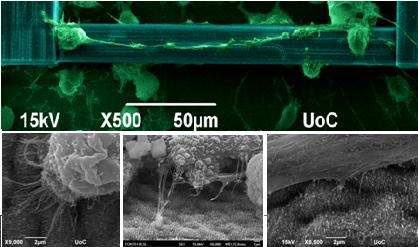