Fluorescence Correlation Spectroscopy (FCS) is an advanced fluorescence microscopy based on recording temporal fluctuations of the fluorescence intensity. It can monitor the motion of fluorescently labelled molecules or nanoparticles within an optically defined focal volume, which typically corresponds to less than 1 fL. Analysis of the recorded data yields information such as translational diffusion coefficients, flow rates, chemical kinetic rate constants, rotational diffusion coefficients, molecular weights, and concentration. FCS provides a suitable methodology for measuring mobility, association, and ligand kinetics of biological molecules in the cellular environment.

Fluorescence Cross Correlation Spectroscopy (FCCS) is a variant of FCS, where two lasers with different wavelengths excite a sample aiming to study the interaction of two species labelled with two different fluorophores, The fluorophores must be spectroscopically different to minimise signal overlapping, cross excitation, or cross talk. FCCS allows recording not only the autocorrelation function of the two species, but also the correlation function between them. As such, it is possible to study species that are not distinguishable by their diffusive properties. 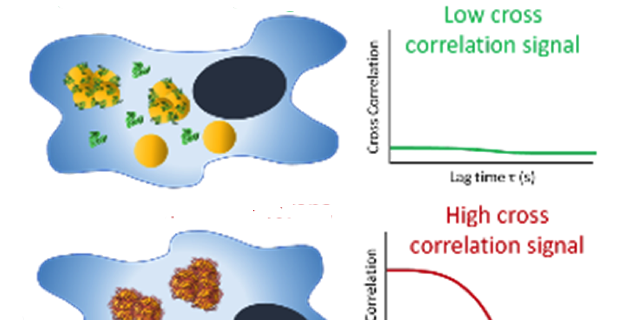