TXRF is an energy dispersive XRF technique arranged in a special geometry. An incident beam is directed on a polished flat sample carrier at angles below the critical angle of external total reflection for X-rays, resulting in the reflection of most of the excitation beam photons at this surface. The sample, which is typically a film deposited on the sample carrier is hit by the X-ray photons. When X-ray quantum hits an inner shell electron in a (sample) atom, the electron is removed leaving the atom in an excited state. The missing inner shell electron is replaced by an electron from an outer shell. The energy difference between the inner and outer shell is balanced by the emission of a photon quantum (fluorescence radiation). The energy, and therefore the wavelength of the X-ray fluorescence radiation is characteristic for the different chemical elements allowing qualitative analysis. The intensity of the X-ray fluorescence radiation is, in first approximation, proportional to the element concentration allowing quantitative analysis.

TXRF can be considered as an alternative to ICP-MS analysis requiring shorter sample preparation times as it does not desire fully dissolved samples. Thanks to the geometrical arrangement, our instrument can also measure powder samples with particle size < 300

µm. The instrument can host up 90 samples for automatized (overnight) measurements. We work with quartz, sapphire or acrylic sample holder discs depending on sample composition. 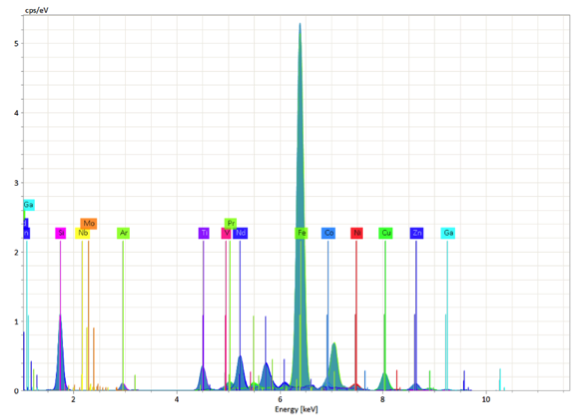