The lensless Coherent Diffraction Imaging (CDI) technique has been developed significantly and is gaining time resolved potentials thanks to the advent of coherent and ultrashort pulses delivered by the X-ray free electron lasers (FEL). The shot-to-shot temporal and energy stability of the seeded-FEL pulses at Fermi@Elettra has opened extraordinary opportunities for CDI and in particular for Resonant Coherent Diffraction Imaging (R-CDI), overcoming some of the limitations imposed by the partial longitudinal coherence of the SASE-FELs.In addition, the multiple (linear and circular) polarization of Fermi-FEL pulses is an added value to explore specific contrast mechanisms, relevant to the spin and orbital sensitive electronic transitions.

The DiProI end-station and the dedicated beamline that transports and tailors the FEL pulses for meeting the stringent requirements of coherent scattering experiments were commissioned in 2011-2012. Exploiting the advantage of FERMI seeded FEL, the same Ti:sapphire IR laser, that triggers the FEL emission, can also be used as a source for IR pulses that are delivered to the end-station through a dedicated IR ‘beamline’ and two optical breadboards. These IR pulses are intrinsically synchronized with the FEL and can be used as either pump or probe in almost jitter-free time resolved experiments.

The DiProI instrument can work in many flexible configurations performing scattering experiments both in trasmission and in reflectrion. Morover the instrument is equipped with a compact XUV delay line that can be set up inside the DiProI chamber before the sample region to split each FEL pulse into to branches and recombine them on the sample with tunable incidence angle and delay. This set up has been used for transient grating, coherent anti-Stokes Raman scattering and time-resolved magnetic scattering experiments.

The typical crossing angle between the two beams is of about 6° and the delay can be scanned in the range of ±500 fs. 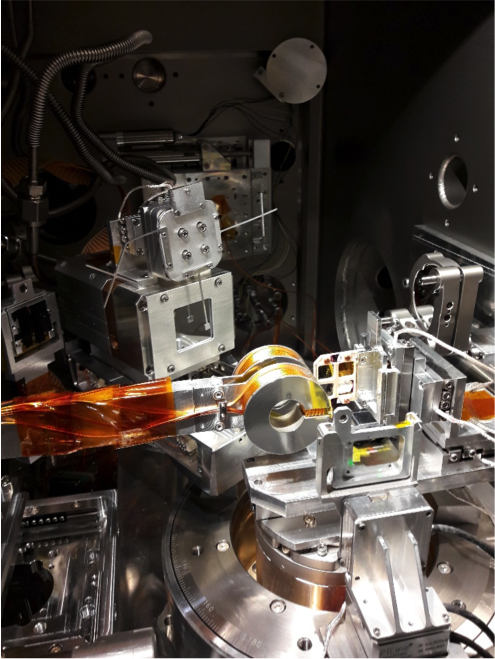 i
@
provided at Large Scale Facilities by:
ELETTRA
Italy