The neutron reflectometer MARIA with polarisation analysis was designed for the investigation of thin magnetic layered structures down to the monolayer scale and lateral structures. The reflection of polarised neutrons allows to determine individually the density and the modulus and the direction of the magnetisation vector of buried layers.

MARIA is optimised for layer thicknesses between 3 – 300 Å and lateral structure sizes from nm to µm sizes. Consequently the instrument is designed for small focused beam and sample sizes of 1 cm2 at λ = 4.5 Å (available: 4.5 Å < λ < 40 Å) in a vertical orientation with a maximum incident angle of 180° and outgoing angle ranging from -14° to 100°. MARIA provides polarisation analysis in standard operation, where the beam is polarised by a polarising guide (z-geometry; 4.5 Å < λ < 10 Å ) and analysed by a wide angle 3He-cell.

Beside the above described reflectometer mode with good resolution in the horizontal scattering plane, MARIA can be used in the GISANS mode with additional resolution in the vertical direction. The latter mode allows for measuring lateral structures down to the nm scale.

At the sample position, a Hexapod with an additional turntable (360°) is installed, which can take a load up to 500 kg. In the standard configuration, magnetic fields are provided up to 1.3 T (Bruker electromagnet) and cryogenic temperatures down to 4 K (He closed cycle cryostat). Beside this standard setup, the complete sample environment of the JCNS can be adopted to MARIA so that magnetic fields up to 5 T and temperatures from 50 mK to 500 K are available.

All parts of MARIA are controlled by a computer system according to the “Jülich-Munich” standard based on a Linux workstation. This allows a flexible remote control with automatic scan programmes, including the control of sample environment as cryostat and electromagnet. A new offer is a special transfer chamber allowing the transfer and measurement of thin films under UHV conditions. Thin film samples can be prepared by molecular beam epitaxy at the MBE setup of JCNS@MLZ, see the offer in Installation 2 (Growth and Synthesis). After growth, the samples can be transferred into the transfer chamber without breaking the vacuum. Measurements and sample transfer are performed at a pressure better than 10-9 mbar at room temperature and in magnetic fields up to 300 mT.

With scattering under grazing incidence, we investigate depth-resolved the laterally-averaged magnetisations and the correlations between their lateral fluctuations. With an additionally polarised neutron beam we derive a vector information on the laterally-averaged magnetisation (reflectivity) and on the correlations between their lateral fluctuations (off-specular scattering – µm length scale, GISANS – nm length scale).

Furthermore possible without the need for multilayers investigation of Diluted semiconductors, Influence of the substrate, Interfaces between oxide materials.

Additionally the instrument in non-polarised beam mode can be used for reflectometry and GISANS studies of “soft” layers at the solid/ liquid interface by the use of appropriate liquid cells that are available at the beamline. Candidate systems for such investigations include polymer brushes, polyelectrolyte multilayers, biomimetic supported membranes, adsorbed proteins etc. For typical applications involving deuterated solvents, the dynamic range that can be expected covers 7 order of magnitude. 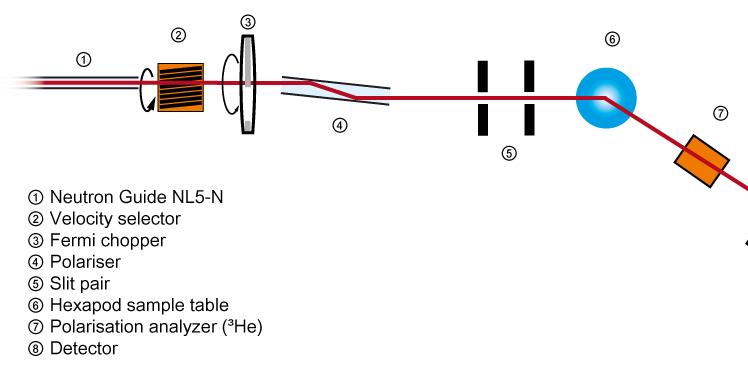