DNS is a versatile diffuse scattering cold neutron time-of-flight spectrometer with polarisation analysis. It allows the unambiguous separation of nuclear coherent, spin incoherent, and magnetic scattering contributions simultaneously over a large range of scattering vector Q and energy transfer E. With its compact size DNS is optimised as a high intensity instrument with medium Q- and E- resolution.

New chopper, neutron velocity selector, and position sensitive detector systems have recently been installed at DNS. This is expected to largely improve possibilities for single-crystal time-of-flight spectroscopy with efficient measurements in all four dimensions of S(Q,E). With its unique combination of single-crystal time-of-flight spectroscopy and polarisation analysis, DNS is also complimentary to many modern polarised cold neutron three axes spectrometers.

With the increased flux and efficiency delivered by the FRM II, DNS becomes ideal for the studies of complex spin correlations, such as in highly frustrated magnets and strongly correlated electrons, as well as of the structures of soft condensed matter systems, such as the nanoscale confined polymers and proteins, via polarisation analysis. The exploration of unusual magnetic properties can also be efficiently undertaken on single-crystal samples by reciprocal space mapping. In addition to the separation of magnetic cross section from nuclear and spin-incoherent ones, polarisation analysis also allows to distinguish in detail the anisotropy of spin correlations. It has also been well demonstrated that polarised powder diffraction on DNS is complementary to standard neutron powder diffraction and may be extremely useful for magnetic structure refinements, particularly in case of small moments by improving the signal to background ratio. DNS also represents a powerful instrument for the soft condensed matter community for the separation of nuclear coherent scattering from often dominating spin incoherent scattering background.

The main applications can be summarised: 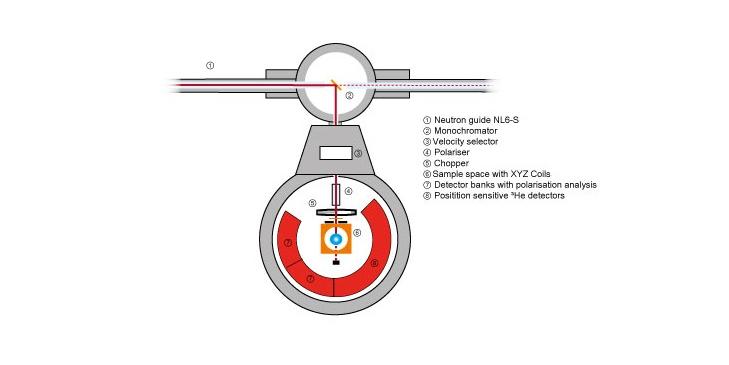