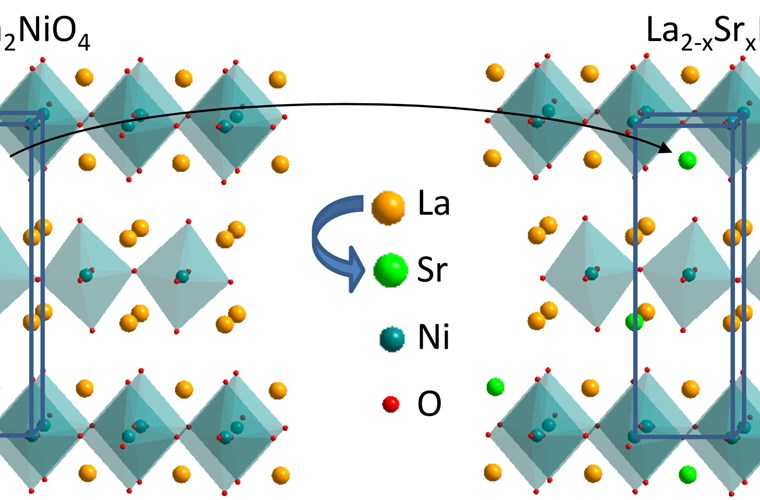 Magnetoelectric effect (ME) can efficiently be defined as the phenomenon of the inducing magnetic moment, by applying an external electric (magnetic field) field, of the induction of electric polarization upon the presence of an external magnetic field. Achieving a coupling between an external magnetic field and the dielectric properties of a material (or vice versa) is a promising tool for further technological applications. On the other hand, The La2-xSrxNiO4 (LNSO) system has so far been studied for its similarity to the high-Tc cuprates [1, 2]. While undoped La2NiO4 is a Mott insulator, doping with Sr causes the induced holes to segregate into periodic one dimensional “stripes”, below a charge ordering temperature - Tco. At a lower spin order temperature - Tso, Ni spins order in between the stripes, which act as domain walls for the antiferromagnetic order. Thus spin and charge order coexist in LSNO, suggesting the possible coupling between them.

The examination of the possible coupling between spin and charge order in the LNSO system, requires the detailed study of the complex dielectric constant ε = ε’ +jε’’, at low temperatures and high magnetic fields. Thus experimental stations including low temperature and high magnetic field equipment, combined with high precision dielectric response measurement set-ups are needed. Considering those demanding requirements, we followed the typical NFFA project proposal application process, which is easy and straightforward, and we successfully applied for getting experimental time to the low temperature facilities in ICMAB-UAB, Barcelona.

In this short contribution we shall show permittivity data as a function of temperature, i.e. H = 0, for both x=0.25 and x=0.33 doping (fig.1 and 2 respectively). In all cases dielectric permittivity shows large values at high temperature and a step-like drop. Freezing temperature Tf increases with frequency, and the dielectric response shows universal scaling in a Cole-Cole plot (not-shown here), suggesting the charge-glass nature of the nickelates, consistently with previous report [3]. Furthermore, fig.1d and 2d, show the frequency change as a function of freezing temperature for both samples, with respect to different orientations. In all cases a clear downward curvature is seen, indicating the the zero-frequency freezing temperature – Tf=0 - is not zero. Moreover it is shown that Tf=0 is strongly dependent on the measurement direction, indicating the effect of stripe-order in the dielectric permittivity. More interestingly, for x=0.33 charge freezing shows similar behavior and almost similar Tf=0 values, for both the [100] and [110] directions. On the other hand, for x=0.25 sample charge gets frozen in a different trend for all three measured directions. It is known that spin order, charge order and correlation length become maximized for x=0.33, in LSNO system. The observed charge freezing behavior directly follows that trend.

Analysis of the presented experimental results reveals strong indications of the expected coupling between charge and spin order in the LSNO system. From this point of view, our project granted for access to NFFA-Europe installations is considered as a successful project. Bearing in mind the challenging requirements of our research project, NFFA-EUROPE network really was the most suitable scientific network in Europe which could provide us with all the necessary tools to accomplish it. Furthermore the perfect organization of the project along with the continuous and non-stop help provided by both the NFFA administration and the NFFA partners in Barcelona, directly lead to the effective and positive realization of our research project.