Metal-organic frameworks (MOFs) are molecular sponges that consist of organic molecules and metal ions. “There is a bright future for these materials in high-tech miniaturized devices such as low-power processors, resistive memory, sensors, and flexible electronics,” says Professor Rob Ameloot from the KU Leuven Centre for Membrane Separations, Adsorption, Catalysis, and Spectroscopy (cMACS). “Both the MOF and microelectronics communities have been striving towards integrating MOFs in microchips, which requires two key engineering steps: thin film deposition and lithographic patterning.”

In 2016, the Ameloot group developed chemical vapor deposition of MOF thin films, a method compatible with industrial chip fabrication. Conventional lithography techniques use a sacrificial layer, so-called photoresist, to transfer a pattern into the desired material. The use of photoresist complicates the process, and might induce contamination of the highly porous MOF films. Now, the team has used the deep X-ray lithography (DXRL) beamline at Elettra to realize the direct lithography of MOF thin films. 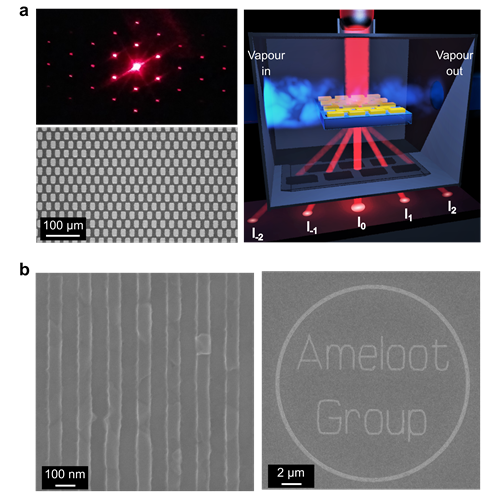 “Our goal was to eliminate the use of photoresist and still have high-quality MOF patterns,” says Min Tu, postdoctoral researcher at KU Leuven and first author of the paper. “Our method is based on selective X-ray or e-beam exposure of the MOF film, which induces chemical changes that enable its removal by a common solvent. This process completely avoids the resist layer, thus significantly simplifying patterning while maintaining the physicochemical properties of patterned MOFs intact. Moreover, we can pattern much smaller features than previously possible, and our technique is already compatible with existing nanofabrication processes. To demonstrate some of the capabilities of this method, we fabricated a photonic sensor that responds to organic vapors.”

“NFFA Europe has offered a unique opportunity to conduct our research project on the direct lithography of MOFs, and the characterization by small-angle X-ray scattering.” Min continues.

“The grazing-incidence small-angle X-ray scattering demonstrates that the crystal structure of non-irradiated MOF film is maintained throughout the DXRL process”, says Prof. Heinz Amenitsch, the responsible of the Austrian SAXS beamline. 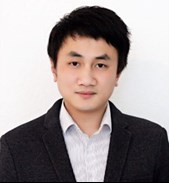 Dr. Min Tu obtained his PhD at Ruhr University Bochum (Germany) in 2015, under the supervision of Prof. Roland A. Fischer. After a short stay at Bochum, he moved to KU Leuven (Belgium) to work with Prof. Rob Ameloot as a Marie Skłodowska-Curie fellow. His research focuses on the surface engineering of metal-organic frameworks (MOFs) for chemical sensors, microelectronics, solid-state lighting, etc. 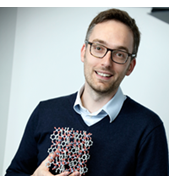 Prof. Rob Ameloot obtained his PhD at KU Leuven (Belgium) in 2011. In 2012-2013, he worked with Jeffrey Long as a Fulbright postdoctoral fellow at UC Berkeley (US). Currently, he is an associate professor at KU Leuven. He was awarded an ERC grant to work on bringing microporous materials from the chemistry lab into the microelectronics fab by developing vapor phase thin film deposition routes. In general, he is passionate about pushing the envelope in porous materials and their applications, with a healthy disregard for traditional subject boundaries. More info can be found: http://amelootgroup.org/.