Directed self-assembly (DSA) of block copolymers is a method of creating polymer patterns over large areas with a resolution of less than 10 nm. The beauty of the method is its inherent simplicity: block copolymers in solution are deposited by spin coating onto a surface; after a short thermal annealing under ambient conditions, the polymer molecules self-assemble to form patterns whose dimensions are defined by the size of the molecules. If the receiving surface features ad-hoc manufactured patterns (so-called guiding patterns), the self-assembly follows the directions dictated by the guiding patterns. In this way, dense arrays of ordered polymeric lines and cylinders are obtained.

Even in its simplest form without guiding patterns, block copolymer lithography has applicability in many areas, such as the creation of nanostructured surfaces of controlled wettability or the fabrication of nano-porous membranes. By incorporating guiding patterns, more complex structures can be made, such as dense arrays of nanomechanical and nanoelectronic devices.

"Having now the block copolymer lithography available within NFFA on the CSIC site in Barcelona will allow to address many interesting applications for which a nanoscale pattern covering large areas is needed ", says Perez-Murano.

DSA of block copolymers can compete with state of the art industrial solutions for high volume manufacturing in terms of resolution and throughput, as EUV optical lithography and DUV immersion optical lithography. But, until now, defect generation during the self-assembly has prevented its incorporation into semiconductor foundries.

Collaborative work among multiple NFFA laboratories has revealed a mechanism for defect formation. The research is based on the creation of very precise guiding patterns. By analyzing the density of defects after self-assembly, the correlation between variations in the dimensions of the guiding patterns and the appearance of defects has been established.

“The analysis of the results has made it possible to expand the existing free energy self-assembly models by adding the energy contribution of the defects. As a result, the process window can be predicted precisely, ”says Steven Gottlieb, a former doctoral student at the CSIC who participated in this research

In the course of the investigation,  two nanolithography methods have been developed to create high-precision guiding patterns: 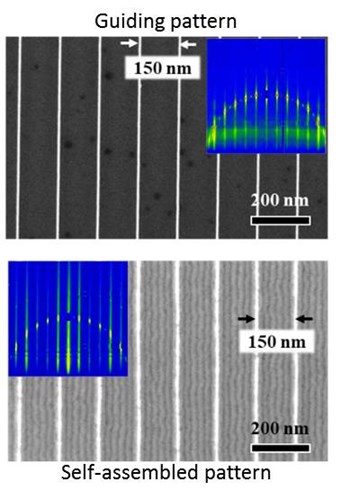 Nano-confinement of block copolymers in high accuracy topographical guiding patterns: modelling the emergence of defectivity due to incommensurability

Facilities:
Cleanroom at PRUAB-Institute of Microelectronics of Barcelona, CSIC in Spain. Swiss light source (SLS) synchrotron and Clean room of the Paul Scherrer Institute in Switerland, and the Nanolab Institute and PETRA III at DESY in Germany.

Steven Gottlieb
This work is part of the PhD thesis of Steven Gottlieb. The thesis has received the best thesis year award by the Electronics Engineering Department at the Universitat Autònoma de Barcelona