The KWS-1 is dedicated to high resolution measurements due to its 10% wavelength selector. This property is interesting for highly ordered or highly monodisperse samples. With the foreseen chopper the wavelength uncertainty can be reduced further to ca. 1%. The scientific background of KWS-1 is placed in magnetic thin films. Magnetic samples will be studied with the full polarisation analysis including incident beam polarisation and polarisation analysis of the scattered neutrons. In front of the collimation, a 3-cavity polariser with V-shaped mirrors is placed. The full bandwidth of 4.5 to 20 Å will be covered with min. 90% (95% typical) polarisation. A radio frequency spin flipper allows for changing the polarisation. The polarisation analysis will be realised with 3He-cells which will be optimised for the used wavelength and scattering angle. Vertical magnets will be provided to render the magnetic field at the sample position. Thin films can be well studied in the grazing incidence geometry – the method is called grazing incidence small angle neutron scattering (GISANS). A newly installed hexapod will allow for positioning the sample with 0.01 mm and 0.01° precision.

Classical soft-matter systems will be investigated on KWS-1 if the resolution is needed. Biological samples can be handled due to the detector distance of ca. 1 m, which will allow for maximal scattering angles of Q = 0.5 Å-1.

The MgF2 lenses are used for the high flux mode with large sample areas, while the resolution stays in the classical SANS range. These enhanced intensities allow for real time measurements in the 1/10 second region (typical 1 s).

The chopper in parallel allows for studying faster dynamics in the ms range. The so-called TISANE mode interlocks the chopper frequency with the excitation field frequency and with the detection binning. The precise consideration of the flight times allows for higher precision compared to classical stroboscopic illuminations.

KWS-3 is a very small angle neutron scattering (VSANS) instrument running on the focusing mirror principle. KWS-3 is designed to bridge the gap between Bonse-Hart and pinhole cameras. Owing to its extended Q range, optimized flux, and good wavelength resolution, KWS-3 has shown good performance and has become scientifically productive to the user community. The principle of this instrument is a one-to-one image of an entrance aperture onto a 2D position sensitive detector by neutron reflection from a double-focussing toroidal mirror.

The instrument’s standard configuration with a 9.5 m sample-to-detector distance allows performing scattering experiments with a wave vector transfer resolution between 4.0•10-5 and 2.5•10-3 Å-1, bridging a gap between Bonse-Hart and pinhole cameras. A second sample position at 1.3 m sample-to-detector distance extends the Q-range of the instrument to 2.0•10-2 Å-1 and reaches more than one-decade overlapping with the classical pinhole SANS instruments. Another “mobile” sample position can be installed to adapt sophisticated sample environment between 8 and 2 m sample-to-detector distance according to the requested instrumental resolution. The instrument covers the Q range of small angle light scattering instruments. Especially when samples are turbid due to multiple light scattering, V-SANS gives access to the structural investigation. Thus, the samples do not need to be diluted. The contrast variation method allows for highlighting of particular components.

Small-angle scattering is used for the analysis of structures with sizes just above the atomic scale, between 1 and about 100 nm, which cannot be assessed or sufficiently characterised by microscopic techniques. KWS-3 is an important instrument extending the accessible range of scattering angles to very small angles with a superior neutron flux when compared to a conventional instrumental set up with pinhole geometry. Thus, the length scale that can be analysed is extended beyond 10 μm for numerous materials from physics, chemistry, materials science, and life science, such as alloys, diluted chemical solutions, and membrane systems. 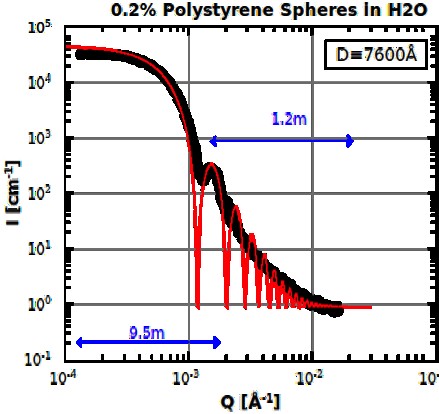 i
@
provided at Large Scale Facilities by:
JCNS @MLZ
Germany