Though based on the same physical phenomena regarding the interaction between radiation and matter, today’s IR spectrometers have evolved in the way they irradiate the sample, replacing the former monochromators for interferometers, giving rise to the faster FT-IR spectroscopy.

Besides its classical application in chemical characterization, the use of infrared radiation has evolved giving rise to new techniques that go further:

VCD (Vibrational Circular Dichroism) is a technique that gives 3D information of molecules. It can be applied for determining the secondary structure of proteins and peptides, the purity of enantiomers and also their absolute configuration by comparison with previously reported data or with data obtained through theoretical simulations.

PM-IRRAS (Polarization Modulation-IR Reflection-Adsorption Spectroscopy) is a very useful technique for the analysis of ultrathin layers and coatings, monolayers and submonolayers and biomolecules, deposited on surfaces, especially for conductors (Au, Cu, Pd, alloys, etc). It allows for the study of not only the composition but also the organization, conformation and orientation of molecules on a given substrate. In addition, it is also useful for analysing phenomena affecting such surfaces, as could be corrosion processes. Thanks to the characteristics of this technique, samples can be measured without reference, giving rise to spectra free from atmospheric interferences such as carbon dioxide and water vapour

FT-IR Microscopy which allows for visible inspection of samples and to obtain FT-IR spectra by coupling all-reflective Vis-IR microscopes to a FT-IR spectrometer. It is useful for performing chemical characterisation in concrete points, and also for obtaining chemical maps of larger areas, with minimum spot sizes of 25-30 μm using conventional IR sources. Diffraction-limited resolution can be achieved exploiting the brightness advantage of IR Synchrotron Radiation (SR), for unveiling vibrational details at few microns in the Mid-IR regime. The non-damaging nature of IR SR and the use of IR-transparent fluidic devices permit the analysis of hydrated species, to follow sample dynamics and to work under physiological conditions at single cell level.

FT-IR Imaging  is a very versatile toll for chemical imaging of large sample areas, that takes advantage from bi-dimensional Focal Plane Arrays (FPA) detectors. The technique is ideally suited for the rapid analysis of a large variety of chemically heterogeneous samples, from slice tissues to polymer blends, in transmission, reflection and ATR mode. 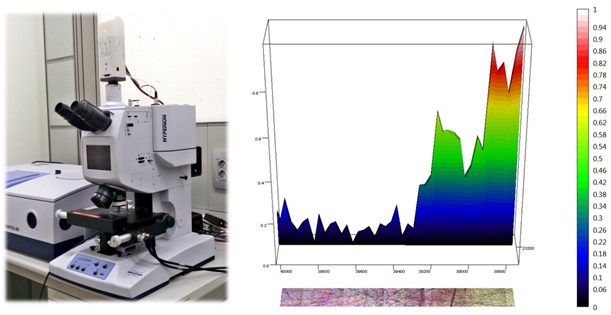 a: Halogen for the Near infrared

b: Globar for the MidIR

5x5mm2 tyically, can be larger or smaller if convenient

Microscopy and Imaging in the MIR regime and with the newest VERTEX FM technology, for spectroscopy covering the FIR/THz and MIR in a single scan.

a. Halogen for the Near Infrared (NIR)

b. Globar for the Mid Infrared (MIR)

b. CaF2 beamsplitter for NIR

a: DTGS, MCT and wide range DLaTGS detectors for spectroscopy measurements in the MIR and MIR-FIR regimes

b: MCT-A, MCT-B and FPA detectors for microscopy and imaging in the MIR regime

b: Max spatial resolution: diffraction limited (typically in the range of few microns in the MIR spectral range)

The branchline is well suited for biological and biomedical experiments, encompassing tissue imaging and single-cell analysis on both dehydrated and hydrated samples. Bulk materials and surface analysis can also be performed selecting the appropriate sampling techniques.

i. Single Reflection ATR with Germanium, diamond and silicon IREs

b: Possibility to design ad-hoc chips for reflection and transmission measurements in collaboration with potential users

Spectroscopic studies at extreme conditions (450 K to 8 K and from ambient pressure and 20 GPa), in the spectral region from terahertz to visible (8 to 20000 cm-1)

a. Halogen for the Near Infrared (NIR)

b. Globar for the Mid and FIR Infrared

a. KBr beamsplitter for MIR regime

b. CaF2 beamsplitter for NIR

c. Si beamsplitter for FIR-THz regime down to 8 cm-1

a. DTGS, HgCdTe and wide range DLaTGS detectors for spectroscopy measurements in the MIR and MIR-FIR regimes

b. He-cooled Si-Bolometer detector for spectroscopy measurements in the THz range

The branchline is suitable for studies in a wide range of fields, spanning from biophysics to solid state, comprising the study of pressure-temperature phase diagrams.  These are the available Sampling Techniques.

a. With the VIS/IR/THz microscope: pressure and temperature dependent micro-spectroscopic measurements both in transmission and reflection mode on solutions, single crystals, films and pellets. The microscope, is coupled to a home-made spectrometer optimized for the in-situ measurement of ruby fluorescence lines for pressure calibration.

b. In the sample compartment:  temperature dependent measurements both in transmission and reflection mode on solutions, single crystals, films and pellets.

Measurements can be performed in the temperature range between 8-450K and at pressures up to 20 Gpa and in high vacuum (10-6 mbar).

Polarization dependent measurements can be also performed in the entire range.

a. At the microscope: micro-spectroscopy measurements at room conditions, under continous N2 purging. with possibility to T-control from 8 to 450 K, in vacuum or at high pressure (0-20 GPa).

b. In the sample compartment: Spectroscopy measurements, with possibility to T-control from 8 to 450 K, in vacuum. Room temperature measurements in vacuum or under continuous N2 purging.

Both cryostats can be coupled with the diamond cell for the study of pressure-temperature phase diagram of matter.