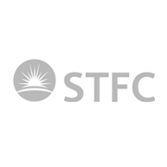 STFC - offical website: www.stfc.ac.uk - The Science and Technology Facilities Council is one of the UK’s seven publicly funded Research Councils responsible for supporting, co-ordinating and promoting research, innovation and skills development in the areas of particle physics, astronomy, and providing large scale facilities to the UK and international scientific communities, including the UK’s contribution to CERN, ILL, ESRF and ESO.

In this project, STFC will participate with the Scientific Computing Department (SCD) which provides large-scale computing resources and expertise in scientific computing and information technology to the STFC science programme and its partners within UK and worldwide.

It hosts the UK Tier 1 centre as part of the CERN Large- Hadron Collider consortium, managing over 15PB of data on behalf of the Particle Physics community; runs HPC systems, including the JASMIN super-data-cluster for environmental science, and the Emerald GPU cluster.

Its Hartree Centre operates HPC resources including the IBM Blue Gene supercomputer for use with industrial partners.